Construct Hope, Rise Above Fear, and Insist On Possibility.

There’s an amazing man by the name of Nicola Dutto. Nicola is an off-road motorcycle racer, and a very good one! In 2008 and 2009, he was a European Baja champion. Then in the 2010 Italy Baja race, he experienced a disastrous high-speed crash, leaving him paralyzed. Anyone who knows a racer, knows that racing is a powerful thing running through his or her veins…a drive and passion that cannot easily be dropped. Nicola was no different and set his sights on racing again. After 9 months of intensive therapy, he entered the 2011 Baja 1000 in a 4-wheeled vehicle. Mechanical failure kept him from completing this race, but he also learned that 4 wheels just didn’t do it for him. He greatly missed having the command of a 2-wheeled machine. The subsequent steps of this story are the pieces that really grabbed my attention. 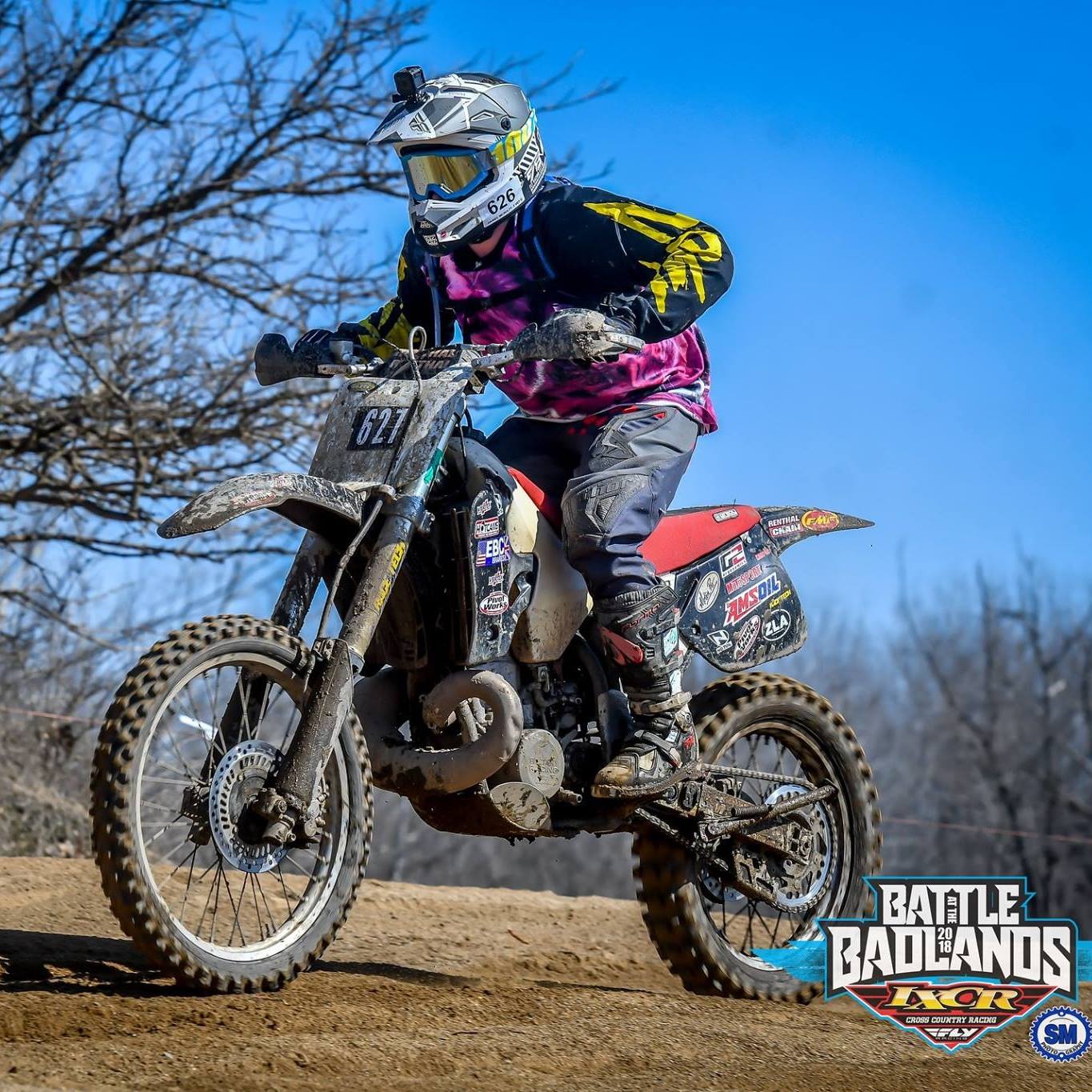 Noteworthy, is the fact that Nicola admits to being terrified to ride again! He knew that his soul needed to ride again. Nevertheless, he wasn’t shy about the fact that it seriously frightened him! As an off-road rider myself, I know that I’m slightly terrified every time I grab the throttle. I also know that the majority of the time I'm riding off-road, I’m actually standing up on the foot pegs, not seated! A lot of steering, control, and weight distribution happens with your legs. They also act as additional shock absorbers and, of course, rear brake control and shifting all happens with the feet! To even begin to comprehend racing at the level of Nicola Dutto while remaining seated the entire time, with no use of my legs, is beyond intimidating!Nonetheless, Nicola did it. He placed 24th in Spain’s Baja Aragon race to become the world’s first paraplegic pro racer just 4 months later and then…he set his sights on becoming the first paraplegic to race the world-legendary, white knuckling, and grueling Dakar race! While I love riding and racing, what truly excites me about this is the passion, determination, skill, creativity, and support of Nicola and his team tackling this together! He needed all handlebar mounted controls, a special seat from a wheelchair cushion specialist, a roll-cage for his lower extremities, and a 3-point harness to hold his legs within the cage, and this was just the necessary hardware ingenuity! Nicola also needed “ghost riders.” People to ride ahead and scan the terrain, helping him choose racing lines, since he would be unable to stop his motorcycle. He also needed two riders behind him to right his bike in case of a fall (which happens a lot to me). In short, Nicola truly relied on his team in many ways. The Dakar race would simply not be possible without his team’s collective brain power, physical dedication, and willpower. He needed them and they quickly rallied around his determination to make his dream a reality. Nicola states that it's difficult to even describe how he now has to ride and that it required a lot of practice for him to become proficient with the changes. While I could read and write about motorcycling for days, what I love even more about this story is the camaraderie, the support, the teamwork, the passion, and the determination of the team! The PATINS Team embodies all of this in my eyes! This PATINS team of incredible people bring their respective expertise together to accomplish seemingly impossible feats for so many Indiana students every week! This team pulls together to get students physical and cognitive access to their curriculum, to put communication systems in place for students who are non-verbal, to create emotionally secure learning environments, to support teachers who feel like they have a "Dakar" race to complete without the use of their legs, to convey information to students who cannot hear it, see it, or organize it. …and this inspiring teamwork happens every single week, all year long! Many of you are also likely part of a team who rallies around student’s strengths, desires, and goals. Frequently, you invite the PATINS staff into your team for further support and we are so grateful for those opportunities to help assist your kids! When we consider all of these things that our teams work to accomplish, one word presents itself prominently; accommodations!Nicola didn’t want to compete in a different race, he wanted to face the same demanding Dakar experience as other racers who were not paraplegic and he needed some creative accommodations and hard-core resolve to make it happen! We have so many students in Indiana who are fully capable of and desiring to take part in the “Dakar” of their educational experience…to meaningfully participate in the general curriculum and obtain a high school diploma, with appropriate accommodations both in the daily classroom and on assessment! The race is the same race, the content is the same content, the diploma is the same diploma, but the ways in which it is approached, interacted with, and responded to could vary! Taking away any one of Nicola’s accommodations would almost certainly guarantee his non-participation. Similarly, taking away any one appropriate student accommodation will almost certainly exclude them from the most meaningful participation in the general curriculum, and effectively, from a diploma.As Case Conference Committees (CCC) come together to build effective Individualized Education Programs (IEPs) for students, they must rally together as a focused, insistent, creative, and purposeful team! Each student’s strengths and barriers must be analyzed. Potential software, hardware, and strategy-based solutions must be trialed! Remember you can always borrow from the PATINS Lending Library and seek support, training, and development from the PATINS Team! Data from these trials must be used to determine appropriate and effective accommodations in each and every IEP! These accommodations must then be implemented with fidelity on a daily basis (the extensive practice necessary to become proficient), and on assessment (the Dakar)!I don’t anticipate losing the use of my legs, or my arms, but if I ever do, I’d certainly be grateful for and reliant upon a team of passionate, hopeful, creative people around me, figuring out how to get me back on a motorcycle as quickly as possible! Figuratively speaking, unfortunate things happen all the time which, on the surface, appear insurmountable, and take our "legs" out from under us. The riding of the “motorcycle” seems like a lost cause many times. These are the times when we need our teams, and students need their teams, to match our/their determination, to be the most creative, and to be brave enough to believe with all their heart that the impossible only seems as such because no one else has done it yet. It’s hope that these dream teams construct! Before Nicola Dutto and his team made racing in the Dakar as a paraplegic a reality, many thousands of people likely didn’t even possess a construct for hope in this regard. Be a constructor of hope in your team! Be the determination who thinks and tries things for 10 minutes longer! Be the creativity that encourages possibility. Be the strength that “picks the bike up” for a teammate every time it falls!
Tweet
Helping Students Move Forward
Traditions

Daniel G. McNulty is the State Director of the PATINS Project.  Daniel's background and experience resides in special education as a paraprofessional, behavior therapist, behavior consultant, respite provider, special education teacher, PATINS Coordinator, and currently, the PATINS Project State Director.  Daniel believes strongly in access, meaningful participation, and high expectations for all people, all the time, in all places, with all other people!  Daniel regularly presents locally, statewide, and nationally on topics around AEM, AT, and UDL.

...much thanks, Julie...much more so for being an integral part of our dream team, working daily to construct hope for so many.

0 Cancel Reply
...much thanks, Julie...much more so for being an integral part of our dream team, working daily to construct hope for so many.
Cancel Update Comment

I love the parallels, it reminds me when we hear "we can't do that, she won't get it in real world when they grow up" we point out we should be designing for an accessible and unwritten future and we can also say "but do you know Nicola Dutto?!"

0 Cancel Reply
I love the parallels, it reminds me when we hear "we can't do that, she won't get it in real world when they grow up" we point out we should be designing for an accessible and unwritten future and we can also say "but do you know Nicola Dutto?!" :D
Cancel Update Comment