Promoting Achievement through Technology and INstruction for all Students
Authors

A Girl, a Frog, and Accessibility 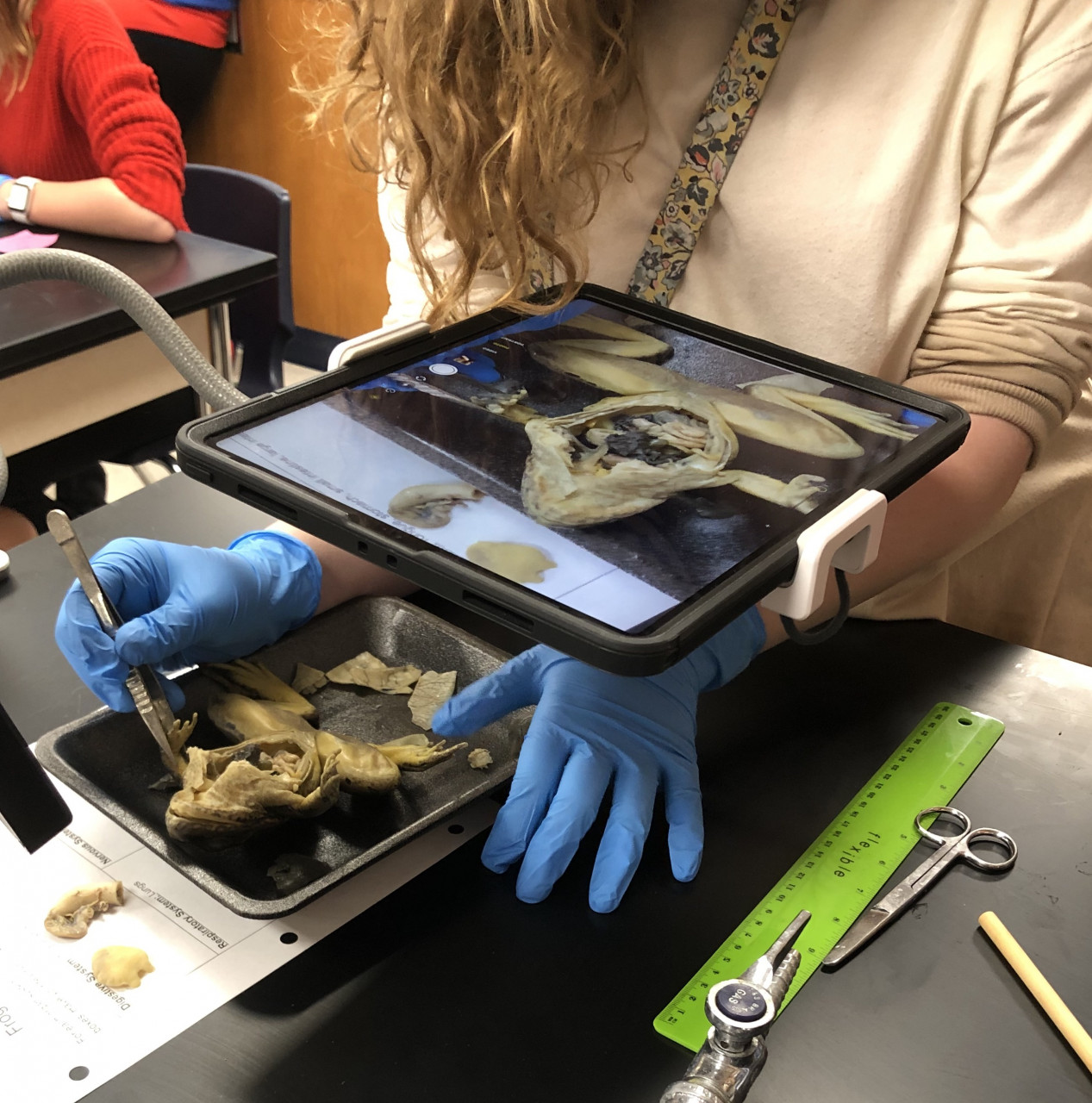 A student with blue plastic gloves completes a frog dissection using an iPad to enlarge her view of the task.

Her inner heart cried out, “Look at me!” and “Everyone is staring at me!” at the same time.

This fairy tale intro is one that I’ve heard throughout my years as both a PATINS specialist and a teacher for the blind before that. Adolescence is hard. Needing to use large print books that don’t fit in a backpack and using a magnifying device to see the board makes it harder.

Most of the students I’ve worked with have been able to move past the “everyone is watching me” mindset. Once I got a teen girl to use her magnifier because she had a cute student teacher and she could see him in hunky detail with it. Another teen girl used the technology for some mean girl antics, inviting a peer to her desk and zooming in on other peers to make fun of them. This made me cry, not because she misbehaved, but because it was so normal. When you have a disability, feeling normal can be a luxury.

The advent of one to one devices and built in accessibility has been a game changer for all folks with low vision, and especially for the teenage folks feeling all the feels. Now students are able to get digital texts delivered to their devices through the Indiana Center for Accessible Materials (ICAM) and facilitated by their district’s Digital Rights Manager (DRM). And whatever is projected onto the board at the front of the room can be sent electronically to the student’s device.

All of the platforms continue to race like a fairy tale hero on horseback to outdo each other with built in accessibility features like enlarged/bold format, enlarged mouse/cursor, special color filters for folks with color blindness, and many ways to have text converted to speech with more and more human-sounding voices.

I received the cover photo for this blog from one of our stakeholders of an 8th grade girl using an iPad Pro clamped in a stand to enlarge her frog dissection in science class. She wrote, “In observing her during the frog dissection lab it was evident that her confidence and efficiency with the task grew using the tablet clamped to her lab table.” She went on to describe how the student took the lead in the dissection where before she would have been dependent on the partner to report observations.

This also made me cry because

This student and many others are benefitting tremendously from new technology. Here’s to their continued success and just the right amount of getting in trouble so that they can live happily ever after. 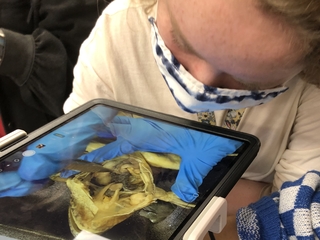 Let me preface by saying I have always been a sucker for technology. I personally found that I have a sense of wonder in what continues to evolve in my own interests. I suppose I can be classified as a “Dabbler” in wide range of devices.

I have made my way through the cell phone jungle from ones that had pullout antennas, to flip phones, to ones with touchscreens of various sizes. I found it a little hard to part with one of my latest cell phones that I had upgraded from. It is a Samsung Galaxy 8S.

I liked this phone because it has a nice screen, an external SD card slot for my music, but it also fits into an external device that turned it into a Virtual Reality (VR) headset. VR has not been around long. Google Goggles had appeared with its cardboard VR, but it wasn’t as solid as what I had. My first few experiences were tours of the solar system, a walk through a museum, and a VR ride on a roller coaster (more about that later).

These experiences seemed somewhat real enough, but they were limited in variety and length. I kind of let it fall by the wayside because my phone’s battery needed to be replaced as it didn’t seem to hold a charge long given the VR demands on the hardware.

Jump forward a couple of years, and we now have a handful of dedicated VR devices and companies working on providing a multitude of VR experiences. Was this the time to reexplore VR? YES!

I did some research and decided to get an Oculus Quest 2. A dedicated VR device that interfaces with Meta, formerly known as Facebook. It not only has the headset but also has 2 handheld controllers.

The Quest 2 fits over the head with adjustable straps to fit snuggly on your head. This takes a little getting used to, as there is a fair about of weight and some critical adjustments to get it just right. The controllers are ergonomically designed to fit in the palm of your hand with a light grasp and it has a variety of buttons and joystick combinations on each hand.

Once set up there are a variety of built-in experiences and ones which can be purchased much like any other device. When the Quest boots up there is a choice of creating a fence or field around yourself to limit your movement before you get too close to objects or there is a stationary selection for when you are standing still or sitting. This component is extremely important, as it is very easy to get so involved that you lose your sense of spatial context. Just Google “VR Fail Compilations” and see why this is important.

What is amazing is how involved you can get in the VR experience that you can easily lose your sense of direction, time and act out with the experience. I mentioned earlier about the VR roller coaster. I have one that is so realistic that I tilt my head left, right, up, and down to the point that I get uncomfortable with the experience. I’ve parked that one for now.

I have found that the documentaries and 360-degree views like climbing Mount Everest or scuba diving in the Great Barrier Reef are so immersive that one could feel the sensation of truly being there.

It is taking me some time to get oriented to the controls. Both controllers have a variety of buttons and toggles that all represent and input commands of some kind. However, there is a hands-free interface that mimics hand movement without the controllers which will probably be more suitable for me as I am discovering my inability to manipulate the controllers. I also just set up voice control as if the controllers and hands-free weren’t confusing enough.

A quick Google search for classroom VR setups and not surprising there are several companies that have classroom packages and curriculum to support VR. I will admit that although I have had my Quest 2 for a little over a month, I can connect with how valuable VR would be to engage students in a classroom.

In a matter of seconds, you can be dropped just about anywhere in the world in a 360-degree environment or experience a virtual reality constructed from computer-generated realism. One such scenario is the International Space Station or ISS. The user can experience real footage shots on the ISS and maneuver around with the crew, or a VR setting where there are missions to perform in and out of the ISS. The experience is breathtaking.

I have only scratched the surface of Virtual Reality, but it is enormously engaging. I have already virtually experienced places I will never get to see in person and have a greater appreciation for how I can closely emulate being there. The journey has just begun.

Is Your Assistive Technology (Still) Biased? 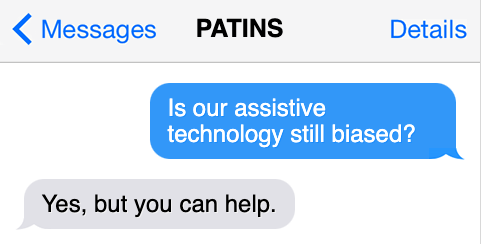 Image: screenshot of a text message that asks

Over a year ago I shared some thoughts about bias in assistive technology: technology was created by humans, so the technology has biases. Biases hurt humans, but humans have the capacity to fix it.

Not surprisingly, some things have changed since I wrote it! There have been small steps towards a more equitable and representative access for all. In 2020 we hadn’t had a single synthesized voice option for Black Americans, and the first one, Tamira, was developed and released earlier last year which is now an option for many Augmentative and Alternative Communication (AAC) software programs.

Also not surprisingly, we have a long way to go.

When someone mentioned to me that we now could finally have Black AAC users with a representative voice, I had to stop and think for a moment.

It’s a start, but that one voice is one attempt to represent a diverse umbrella of accents in the United States. That voice alone can’t accomplish all that needs to be done to have a "representative voice" for Black American AAC users. For example, when you look closer at the language in most of the robust software for AAC, you notice the bias: you can’t conjugate sentences properly in African American English (AAE). In some software you can say “he is sick” but you can’t say “he be sick” which is a common linguistic feature of many varieties of AAE. The “habitual be” in some AAE and Irish varieties, for example, shows the difference between being sick once or habitually being sick. I can’t conjugate “ain’t” or say “finna.” The word prediction doesn’t predict the correct grammar or vocabulary of AAE.

“Of course not. We don’t want them to sound uneducated.”

Oh yikes. Or as many would say in the Midwest: “ope!”

Prescriptive grammar, the idea there could ever be “the right way” to speak a language, is still a prevalent bias in education and assistive technology. As a speech-language pathologist, there is a lot of harm to children and families by describing a linguistically valid way of communicating as “uneducated” and not representing it properly.

We want all students to be able to sound like their community. There is power in knowing how to communicate in the way your community expects (or to defy the rules, as you choose). To know the very words you say tie you to your family and generations of history is like having a bit of your ancestors in every sentence. We still haven’t created technology that allows that for every person, only some, and that’s a problem.

As perhaps some English speakers could have said 900 years ago:

It’s said that addressing bias is a lot like tending a garden, not winning a race. You put in a lot of sustained effort and you might see a little growth. Sometimes you don’t (yet). When you’ve addressed the bias you notice, give it a few weeks, and then your work and effort will be needed again for something you never noticed before.

It’s the garden worth tending to as we have a lot of human potential to grow.

Do You Speak American? from PBS

Contact a PATINS Specialist on how to incorporate your student’s language(s) and dialect(s) into their communication system.

PATINS also has a webinar on "Culturally and Linguistically Representative AAC" that any Indiana PreK-12 stakeholder can request live. Email me to schedule it at a time that works for you.

15 Aug
I Love Data!
16 Aug
Emotional and Behavioral Regulation Using Assistive Technology
17 Aug
All Behavior is Communication
18 Aug
ICAM Digital Files: Delivery and what to do once you receive them!
23 Aug
Making Windows & Microsoft Work for Your Students Webinar