Is it Thursday yet?

Gen., Announce., Events
Jeff Bond
2201 Hits
2 Comments
If you have read any of my other blogs I have focused on my grandchildren, and this one is no different.

My oldest granddaughter, Mackenzie (Kenzie) now 5, has been having some sleeping issues. My daughter, Emily, had recorded her snoring in her sleep and shared it with their pediatrician. The pediatrician was very concerned as it was very well pronounced and indicated that her airway was being compromised by her tonsils and adenoids.

Kenzie was referred to an Ear, Nose and Throat specialist and it was confirmed that both her tonsils and adenoids needed to be removed. Kenzie listened to the diagnosis and the recommended procedure.

Emily and the doctor discussed with Kenzie what would be best for her and what it would involve. Kenzie was on board and wanted to know when they could be removed. The procedure was scheduled two weeks out.

Now one should remember that Kenzie just turned five and is in preschool. Time concepts at her age are days of the week, months of the year and the next holiday to celebrate. So, saying two weeks was still somewhat abstract to Kenzie.

On their way home Kenzie asked if her tonsils would come out tomorrow. Emily explained that it would be on Thursday in two weeks. At that point Kenzie asked, “The next day then?” It began to sound like the proverbial, “Are we there yet?”

When they got home, Emily made a countdown calendar to help Kenzie with the timeframe, so she would have a better understanding of how many days would come and go before the procedure.

From that day on Kenzie was treating her upcoming procedure as if it was a holiday to celebrate. Her anticipation of what was going to happen was almost truly unnatural.

As adults, we know what is involved and some know firsthand what this experience is like. My youngest daughter, Sarah, had her tonsils removed at the age of twelve and post-surgery was tolerable but still somewhat uncomfortable. My personal thoughts were, “Oh child you have no idea…” but Kenzie was so excited to share that this was about to happen.

A couple days before the surgery, Emily tried some of the post-surgery foods with Kenzie. Jell-O, pudding, ice cream and popsicles and Kenzie had no issues with that. The night before everyone was given their designated duties; Mimi and Pappy Pa were instructed to take care of Ethan, our 2-year-old grandson.

Kenzie had her special pajamas and off to the hospital they went. Emily would send pictures and a timeline as to what was happening and Kenzie was still all smiles.

The procedure went well and when Emily and Jamie went back to recovery, Kenzie was sitting up as if nothing had happened, all smiles. For any parent, the last thing we want to do is see our children in discomfort, but that wasn’t the case so far. 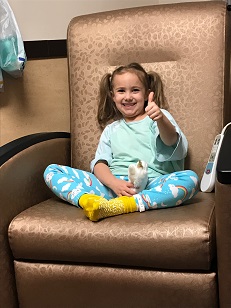 Fast forward 4 days and really nothing has changed except for the snoring. Kenzie has not had one complaint to speak of, which is quite a relief to all of us.

There is something to be said about the attitude one brings to the table and how we perceive what it is we expect. Kenzie’s lack of knowledge as what to expect was natural. What helped her to be prepared was the information and honesty about what to expect in real terms and that in the end, the outcome would be in her best interest.

So, what does this have to do with education or anything remote? On the verge of any testing, what can parents and teachers do to help prepare their child or student for any anxiety that might confront them?

PATINS hosts a PATINS/ICAM Twitter Chat on Tuesdays at 8:30 EST. (#PatinsIcam Chat) to tweet and chat about topics that pertain to education. It just so happens that the Tuesday of this blog the topic dealt with creating and maintaining a positive test environment.

It paralleled what we experienced with Kenzie to a degree regarding preparation and expectation.

Below were the Twitter questions for the chat. I am not going to address the questions but through Kenzie’s experience, it’s food for thought.
Kenzie would say pudding, popsicles and ice cream for this one!

Great blog post! My 23 year old daughter is having this done in July, I hope she does as well!

0 Cancel Reply
Great blog post! My 23 year old daughter is having this done in July, I hope she does as well!
Cancel Update Comment

What a great parallel and lesson for us all! Thanks for sharing Jeff!

0 Cancel Reply
What a great parallel and lesson for us all! Thanks for sharing Jeff!
Cancel Update Comment
First Page Previous Page 1 Next Page Last Page